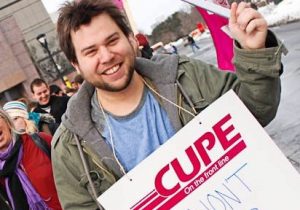 On January 17, 2017, Mat Nelson – Ottawa-area labour activist and former President of the Ottawa CUPE District Council – passed on, surrounded by his family and friends. Mat was a dedicated activist who believed that social change takes place when people are engaged and that is exactly what he did and how we all knew him. He was compassionate, brilliant, and funny.

Mat was a member of CUPE 4600 at Carleton University where he was finishing his PhD. He served on the Local’s Executive for many years, including as President for several of those years. He also served as a member of the bargaining team. Mat was a delegate to the Ottawa and District Labour Council and served as President of the Ottawa CUPE District Council from 2013 to 2016.

Our heartfelt condolences to his family, friends and comrades. You will be missed dear Comrade!

There are no upcoming events.